rally around the flag effect


There are countless numbers of theories about how international relations work. Policy maker decisions will depend on which of these theories they believe. This page explains some of the most common theories in the field.

If an agency is passed over situation after situation, they will become outdated and irrelevant, losing resources and potentially being shut down. To avoid this, it makes sense for agencies to advocate for their own solution. For example, the State Department will typically argue for diplomatic solutions, whereas the Defense Department tends to advocate for military solutions.

Collective security is the idea that a group of nations that agree to come to the defense of one another is safer than nations acting individually. If the U.S. is not in a collective security pact, for example, then a potential enemy would only have to deal with the U.S. power in a war. However, the U.S. has been in the North Atlantic Treaty Organization since 1949. A foreign country that wants to attack the U.S. will have to deal with the power of the United States, as well as that of France, the U.K., Spain, Portugal, Italy, Germany, and several others. The likelihood of an aggressor winning such a war is dramatically lower than if the U.S. did not have a collective security pact.

Not being in a collective security pact, however, does not mean that no other countries will come to your aid - you could have other alliances, or there could be countries sympathetic to your plight. However, the goal of collective security is to have a standing, well-known consensus to dissuade potential aggressors, rather than to have countries fight with you after the fact.

Deterrence is when an action is taken with the intent of making another actor less willing to take an undesirable action. For example, during the Cold War the U.S. tried to practice deterrence by building up arms. By placing missiles in Turkey, the U.S. was threatening the Soviet Union, implying that if the Soviets attacked the United States, then the U.S. would attack in return.

While sometimes the power disparity between two countries is stark enough that one country can threaten force without a reciprocal threat from the other country, a more equivalent power balance will frequently result in arms races. This is what happened in the Cold War - both the U.S. and U.S.S.R. entered into a cycle of continuously building up weapons to try to threaten the other into submission. With nuclear weapons in play, the two countries achieved "mutually assured destruction" - if the U.S. shot first, the Soviets would be able to retaliate, and vice versa, ensuring that if one country attacked, both would suffer.

Many scholars believe that this is the best practice for convincing other actors to behave how you want them to. Others believe that a tit-for-tat strategy is better. In practice, it is more realistic for some situations to lend themselves to deterrence, and others to tit-for-tat.

Domino theory was the common philosophy of the Cold War. If one country fell to communism, others would follow. This prompted the Vietnam War, as well as other efforts to halt the spread of communism.

This is a more recent perspective on how to predict interstate interactions. It looks at relative balances of power between two countries over time. According to the theory, a rising power (blue line) poised to overtake another power (red line) will not attack because all they have to do is wait, and they will end up with more power. Conversely, when a higher power (red line) feels pressure from a rising power (blue line), it will attack as a last ditch effort to retain its position of power. While this does not always hold true, it has some explanatory power.

There are three types of polarity: unipolar (hegemony), bipolar, and multipolar. In a unipolar world, there is one major power; in a bipolar system there are two major power; in a multipolar world there are more than two. Different scholars will argue that one of these options is the most "safe" world, meaning the least likely to be conflictual, and one of the options is the least "safe".

one
Unipolar system are considered safe because the lower powers don't have much of a chance to beat the hegemon in a war, so they won't try. It's considered unsafe because there are no major powers to rein in the whims of the hegemon - they can attack whomever they please with minimal repercussions. Some scholars consider the current world to be unipolar, and relatively peaceful; conversely during the Roman Empire there were many wars of expansion. 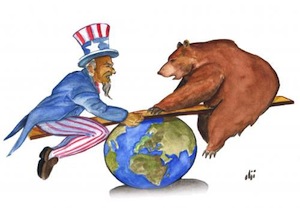 two
Bipolar is considered safe because the two powers balance each other out and thereby prevent the other from engaging in violent actions. These systems are considered unsafe because the two powers are likely to fight each other to become the hegemon. The Cold War was a largely bipolar system, but it could be considered either violent or non-violent depending on your point of view - there were lots of proxy wars (Vietnam), but the U.S. and Soviets never went to war themselves.

three +
Multipolar worlds are thought to be safe because a large number of countries balance each other out. They are considered unsafe because of the tendency to create a massive world war. World War I is an example of a multipolar world falling into violence, but some people consider the current, relatively peaceful, world to be multipolar.

Which do you think is the best state for the world to be in?

rally around the flag effect

It has been shown that when the United States is involved in a foreign war, approval ratings skyrocket. Some scholars posit that this incentivizes presidents that are facing domestic difficulties to search out a foreign entanglement to distract the public. There has never, however, been a case of this definitively happening.

Some scholars say that the security dilemma can be mitigated by choosing defensive weapons that cannot have an offensive purpose. For example, building an radar system to detect incoming missiles in support of existing anti-missile infrastructure is less threatening than building fighter planes, which can be used for defensive or offensive purposes.

The tit-for-tat strategy assumes that actors can be cooperative. Scholars that like this strategy believe that a combination of incentives and disincentives are the best way to deal with other countries. In practice, if State B makes a undesirable action, State A should respond negatively. If State B makes a desirable action, State A should respond positively.