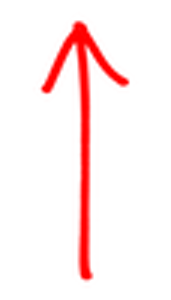 The policy process is a constant cycle, starting with deciding what to focus on (setting the agenda). From there, policy options need to be formulated, a decision on which is best needs to be made, and then implemented. While implementation appears to be the end of the cycle, the next steps depend on the success of the policy. If it was a success, then that issue can exit the cycle. If not, then it may reappear on the agenda so that policy makers can iterate on the policy, hopefully coming up with a better solution.

The first step in policy making is determining what issue needs new policy. It could be a completely new issue that cropped up suddenly, or it could be an existing issue that already has an existing policy but the president is considering updating it. Maybe the topic is something the president personally wants to change, or maybe it's a problem brought to his attention by a cabinet member, public sentiment, or the media. The flow chart below shows how what the media care about, what the everyday citizen cares about, and what the policy makers care about all influence what gets on the agenda. 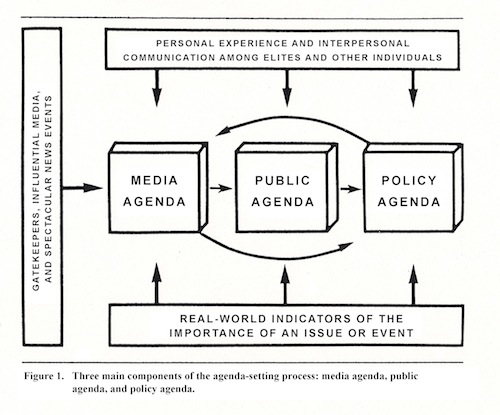 Obviously not everything that is brought to the president's attention will get addressed, or at least not immediately, but when he decides to put something on the agenda, the next step is to assemble his cabinet so that they can help him formulate policy options to address the issue.

To form foreign policy, the president relies on several different groups at his disposal to come up with different options. His Cabinet, consisting of the heads of various executive departments and agencies, will each help inform policy decisions that fall into their area of expertise. For example, if the president is considering changing trade relations with another country, he will likely ask his Secretary of Commerce for his or her opinion on the matter, given what they know about the current economy and how trade will affect it.

Sometime a policy is intended to incentivize another foreign entity to act in a certain desired manner. To achieve this, there are several broad categories of foreign policy tools: let present trends continue, diplomacy, military force, economic tools. These can be made into encouraging incentives, or discouraging disincentives. 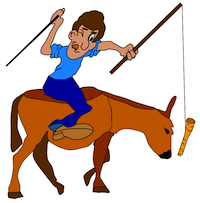 Taking no action allows what trends are currently occurring to continue unhindered. Diplomacy is carried out by the Department of State. The Secretary of State and Ambassadors try to negotiate a settlement with the heads of other involved nations. Military force can be used to attempt to force a nation to act how you would like it to. The threat of military force can also be used as a deterrent against a future action. Economic tools include sanctions - such as tariffs and boycotts - and foreign aid. A tariff places a tax on a foreign good or service; a boycott is a refusal to buy a certain good or service. Foreign aid is when a country provides monetary or in-kind support to a country in exchange for acting in a favorable manner.

Once the president has his options laid out in front of him, he has to pick one. Sometimes the choice is an easy one given the information and available intelligence. Frequently, however, there is no clear cut winner. Even if the president personally considers an option to be the best, that may be contrary to public opinion or his advisors' advice. Sometimes, even when all three line up the decision can still turn out to be "wrong".

So how does the president choose? They have to weigh the intelligence, the theory-based predictions, any historical analogies that they or their Cabinet apply, and hope to make the best decision.

Intelligence, mostly gathered by the various sub-departments in the Department of Defense, is vital to informing policy decisions. Accurate intelligence can increase the capacity to make a "correct" decision, while inaccurate intelligence can cripple that capacity. For example, one of the biggest reasons for the War in Iraq was the intelligence confirming that there were weapons of mass destruction (WMDs). Now, one of the biggest critiques of that war is that the intelligence proved to be false. Many people condemned President Bush and his advisors for acting on what was later shown to be poor intel. Of course, whether the war was a right or wrong decision is a matter of opinion. What do you think?


Foreign relations theories can also inform policy decisions. There are many different theories, and they are frequently conflicting. Which ones are and are not applied depends on which schools of thought the president and his advisors believe. For example, some scholars argue that democracy is a major factor in determining whether a country will be peaceful or not, while other scholars argue that countries will be peaceful towards those with whom they trade, and still others argue that there isn't much of a correlation between either of these characteristics and peacefulness. Depending on what a president and their advisors believe, there are several different approaches to a peace-promoting policy that could be chosen. For more detail on foreign relations theories, click here to go to the ideologies page.


"History repeats itself" - The favorite saying of every history teacher, and a comfort to many policy makers. Relying solely on intelligence and theory can be hard sometimes, as those they both are not concrete. Think about some mundane task… flipping a light switch. Down is off, and up is on. How do you know this? Because you've seen it done, and done it yourself countless times. But imagine that you have never seen a light switch before. How do you know what it does? Maybe someone told you that it's supposed to turn lights on and off. They tell you about all the wires that carry the electricity from the source to the bulb, and the switch opens and shuts the wires. You probably believe the person, but it is impossible to say with 100% certainty yourself that they are right. Now let's say that even though you haven't seen a light switch work, you've seen a faucet turn a stream of water on and off. Up is on, down is off. Sounds similar to this light switch thingy. Remembering that, you're probably a little more confident that flipping the light switch up will indeed turn the light on, and vice versa.

How does that apply to foreign policy decision making? A policy maker will frequently call on historical occurrences to support or refute a policy option. For example, President Johnson sent troops to Vietnam largely based on the fear that not doing so would allow communism to spread à la the 1930's spread of communism in Eastern Europe. Like many historical analogies, this one was not good. Johnson did not consider the analogy of French troops being soundly defeated at Dien Bien Phu. In retrospect, the Dien Bien Phu analogy shared many more commonalities with the situation Johnson faced, and therefore would have likely resulted in a better policy decision.

Why are so many analogies poor when they seem so useful? Analogies can be very helpful - if they are chosen wisely. Typically, humans will selectively recall historical periods that were significant to them personally, or that they lived through. Additionally, humans tend to select analogies that will support the framework that they are already favoring. Thus, it is incredibly hard to choose an analogy that is actually representative of the situation at hand.

At this point, the success of the policy should be monitored. Hopefully it will work on the first try, but if not then it would need to go back on the agenda and the process to determine and effective policy would restart.